“Anyone want a place in the August Hardmoors 55?” said the post in May 2021.
“Three months to go,” I thought.  I had been training for the recently cancelled Lyke Wake Challenge and I would now have more time to get even fitter!
“Yes please” I replied on the Hardmoors Facebook page, and like that, I was in.  If you’re unfamiliar with the Hardmoors series then listen back to the podcast episode 173 and Jody’s old school ultra runner ‘bromance’ with Jon Steele who founded the Hardmoors races.

The Hardmoors 55 takes place annually in March but due to Covid-19, a delayed running was taking place in August.  Having attempted this race once before, but pulling up short at 33 miles during the infamous “Beast from East” year I had a score to settle.

Skip to August and training hasn’t quite gone to plan.  I’ve got some miles in but nowhere near as many as I would like to.  I’ve ran some hills but nowhere near as much as I would have liked to. I’ve lost some weight but …. You see where this is heading.  So having run a couple of weeks before and “bonked” during a 23 miler (nothing saucy like David Hellard’s summitting but referring to the term for running out of energy during a run) I was not quite where I had imagined being in my preparation but ever the believer in relentless forward motion I was going to finish this race regardless of how long it would take!  I considered my fuelling as a weakness and decided to revisit the Facebook Live / Lornacast interview with Gary House after which I decided to adopt an 80 grams of carbs per hour fuelling strategy for the race and methodically planned out my drop bags to help me achieve it.

The organisation at race HQ was seamless and as usual, the volunteer's friendly faces welcomed lots of runners (many of whom were coming back to their first mass start) in a very calm and reassuring way.  In only my second outing as a Bad Boy Running Club member, I was in full colours and delighted to receive my first official “Fuck you buddy”, from fellow Bad Boy, Ian Ferguson who was loudly and vigorously talking smack as any good cult member should.  I could happily DNF now and still count today as a success!

The race begins with a steady climb to the top of Highcliffe Nab above Guisborough and then follows the Cleveland Way via Roseberry Topping with a scramble across the Waintsones to Lordstones Country Park and on to Osmotherley.  It then heads south over the old Hambleton drovers route across Black Hambleton to the Kilburn Whitehorse and finishes in Helmsley.  In total it covers just under 55 miles (following the removal of the double Roseberry Topping) and over 2300m of ascent.  Hardmoors events have generous cut-off times to encourage runners of all speeds to be able to take on the challenges but this year I was aiming for completion under 13 hours. 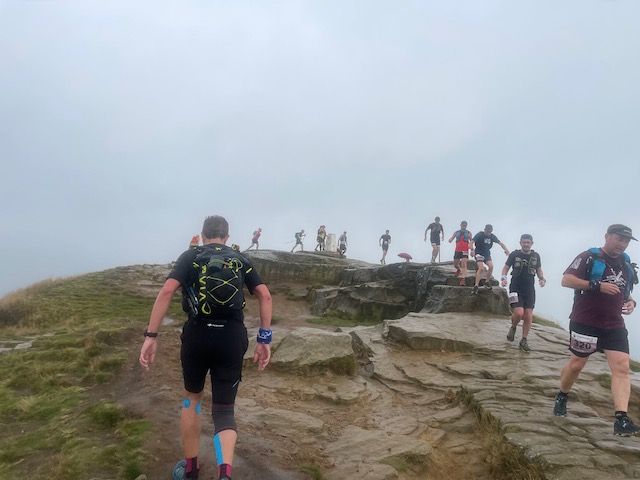 Six checkpoints were set out at regular intervals and provided plenty of opportunities to stock up on water, fizzy drinks, fruit, peanuts and sweets!  A personal highlight was the “Wham” bar at Scarth Nick checkpoint and the Banana / Watermelon combo and the White Horse checkpoint.

The weather at the start was quite mild but by Roseberry Topping, at 7 miles in, the drizzle turned to heavy rain as we skirted the western fringes of the moors meaning that feet were constantly wet but despite the rain, I felt surprisingly good.  The fuelling was helping to stave off some of the normal ultra race issues I had faced and this gave me the confidence to push my pace a bit more than I had expected.  As a “shire” the Hardmoors term for a 14 stone plus runner I was never going to be at Richard McDowell pace #CTFB but I was going reasonably well for a big un!  The beauty of the Hardmoors 55 is also that it takes in some of the most spectacular viewpoints and parts of the North York Moors too and if you’re one of the lucky ones who can enjoy lifting your head and taking in views whilst running I would highly recommend you get involved in a Hardmoors event.

In the end, I managed to reel in a few more people and even clocked a final 9:21 minute mile (which may sound slow to the elites but considering my average pace was 13:15 it was a strong finish) finishing in just under 12 hours.  Especially gratifying as the person I ran past to claim a top 50 place shouted “Fuck you” as I looked over my shoulder at him and he realised he didn’t ‘have the legs’.  I thought he may have read the hashtag on the back of my vest but he later confirmed it was definitely not a “fuck you buddy”! 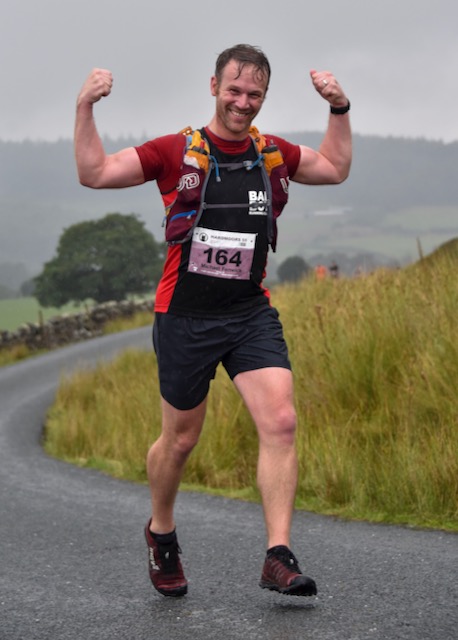 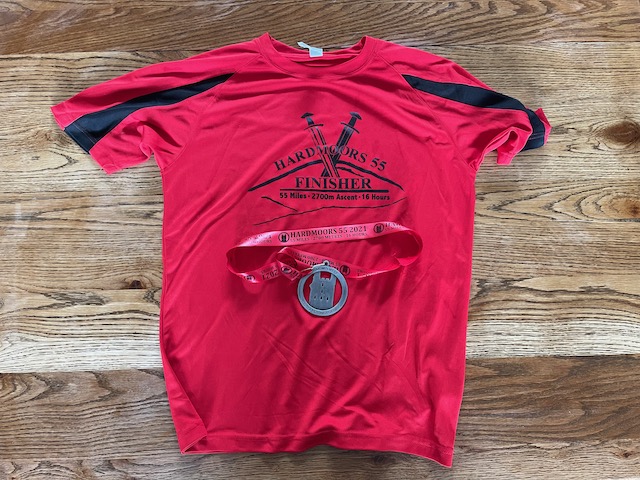 If anyone is thinking of venturing up’t North and out onto the moors then I’m the Yorkshire and Humber BBRC rep so give me a shout for a guided run and or a pint!