<disclaimer> I originally wrote this for Ultrarunner Magazine, but edited it a little bit for here </disclaimer>
(Ed - 🙄)

Country to Capital is one of those classic ultra races that you have heard of, or know someone who has run it. I entered for the January 2021 race, but due to Covid it was postponed to the summer, and as it fell a week before my first 100-mile race, I thought it was wise to defer until the following year.

After a pretty successful ultra-marathon debut in 2021 I had set myself a fairly lofty goal time with the course record firmly in my sights, but preparation hadn’t gone quite to plan with a niggling hamstring limiting training volume in the lead-up.  Advice from David Hellard who had finished on the podium a couple of years ago was to run the first half with someone who knew the route as there were a few areas of tricky navigation.  The day before I was furiously studying the route map and watching the videos on the event website, plus downloading the route onto my Garmin, crossing my fingers that it was accurate, as I had no intention of running to anyone else's pace, regardless of how well they knew the route!

A reasonably early start saw me at Marylebone station for the  7:27 train to Wendover and a large number of runners ready to board had several members of staff confused and enquiring what we were all up to.  Registration at the Shoulder of Mutton pub next to the railway station was smooth and shortly after all 280 starters were assembled outside glad that the rain had briefly stopped, ready to rampage down the short section of High Street.  8:45 and we were off, I led the charge and was the first to turn right and get through the first bottleneck, and the short story is that I didn’t see any of my fellow competitors until over 5 hours later!

'...running seemed like a recipe for wasting lots of energy sliding around as much as making forward progress'

The first half of the route undulates over the Chilterns on a mix of asphalt and trail before hitting the Grand Union Canal for the final 20 miles to Paddington. As it had rained a lot in the lead-up to the race, it’s fair to say that conditions underfoot were slippery, and not particularly fast.  For several of the relatively short but fairly steep climbs, I reverted to a brisk walk, as running seemed like a recipe for wasting lots of energy sliding around as much as making forward progress.  Following the GPS track on my watch proved to be almost flawless, and having watched the videos of the route through Chesham and Denham meant I knew what turns were coming up in advance. 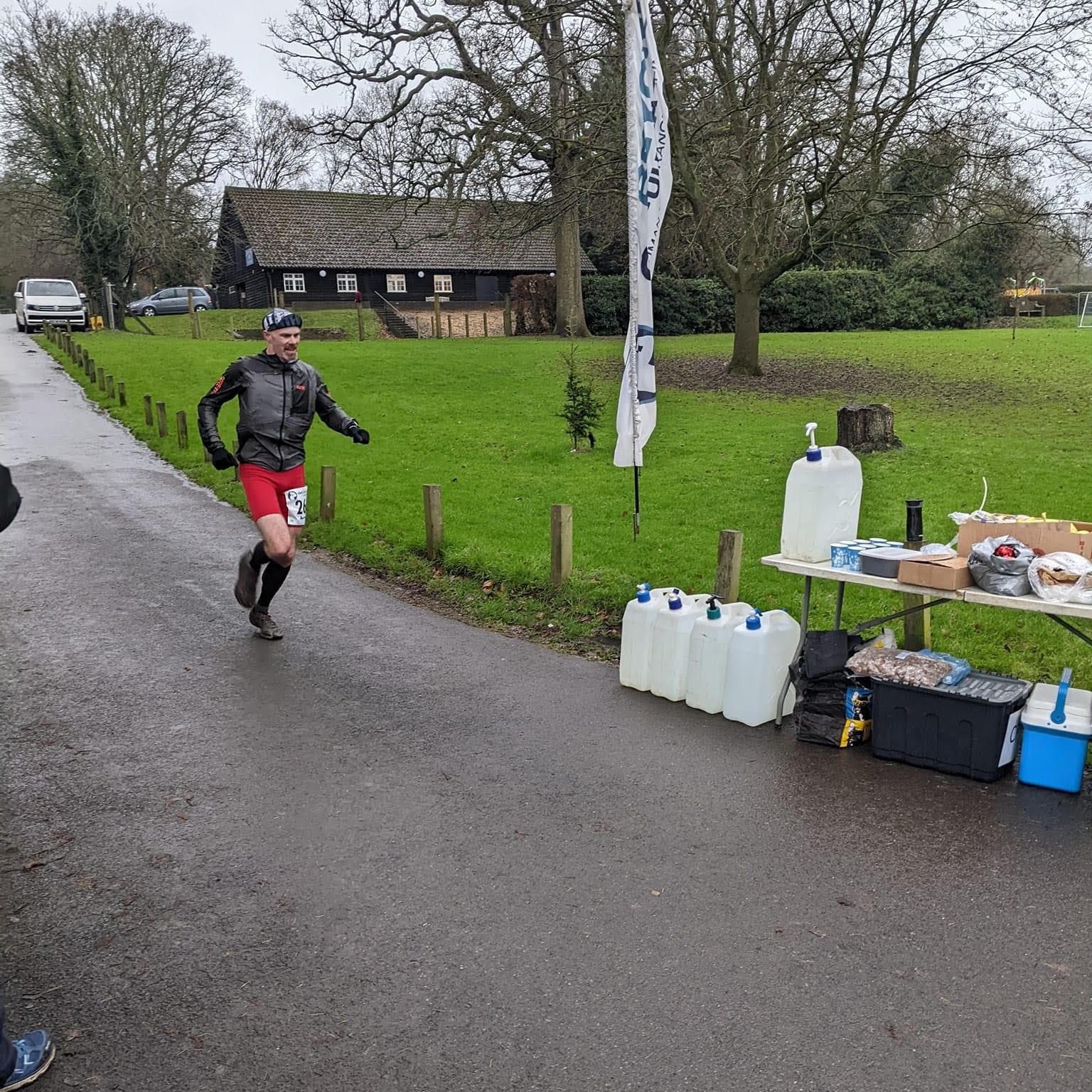 Only once did my watch suggest that I needed to be cutting through a garden, but that didn’t delay me much as it was soon apparent that the path ahead soon joined up with where my watch wanted me to go.  I was carrying a litre of Maurten to drink and a couple of gels, so wasn’t planning on stopping at any of the aid stations. (In hindsight a few more gels or some food wouldn’t have gone amiss, as I think my total intake of around 600 calories left me with a significant deficit which could explain how the later stages of the race played out…)

'It soon became a case of conservation, and count down the miles without blowing up or grinding to a halt..'

With my goal time in mind I was making good progress and was on target, and while the near continual rain and apparent constant headwind weren’t hugely welcome while combined with the slippery mud, I reached the canal unscathed in around 2 hours 35 minutes. The plan was to reach the canal feeling fresh, and then pick up the pace, but it became apparent at this point that maybe I had been pushing harder than I realised earlier, and the hamstring wasn’t feeling amazing either. It soon became a case of conservation and counting down the miles without blowing up or grinding to a halt, and as much a mental battle as a physical one.  Once I realised that my goal time of 4:45 (which would knock about 11 minutes off the course record) was out of the window I stopped paying so much attention to pace and focussed more on keeping ahead of 2nd place.

'I was confident of being the first finisher, but what I neglected to check was my estimated finish time'

I retrieved my phone from my pack vest and checked the tracker to see what sort of gap I had, and whether it looked safe.  It seemed like at least a couple of miles, but if I slowed significantly and he put on a spurt, that could soon be eaten up.  I allowed myself a few walk breaks to check the tracker as I progressed, and it seemed like the gap was remaining fairly static, so I was confident of being the first finisher, but what I neglected to check was my estimated finish time.  Had I realised how close to the course record I was, I’m sure I could have picked up the pace in the final 10km or so, but I was oblivious to this at the time… It came as a welcome relief to reach the finish line, but somewhat frustrating to find that I was about a minute outside the course record.  I think the fact that 2nd place arrived 20 minutes later, and there was a further 10 minute wait for 3rd confirms that conditions were far from optimal, so I can’t be too disappointed. 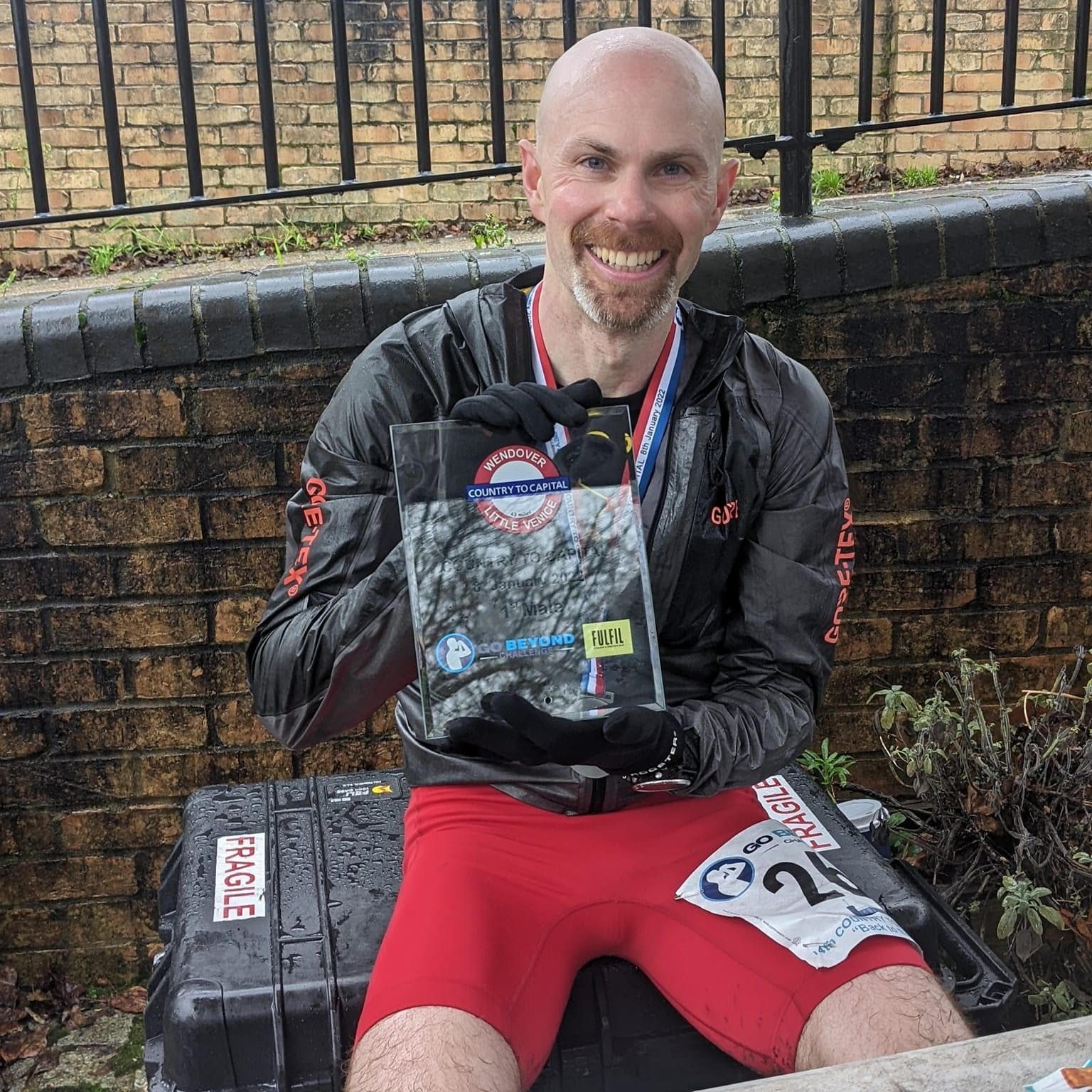 I know Dave Stuart will be disappointed as he reckoned that 4:40 should be a #formality, but then with poor weather, he said he'd let me off with just a course record.  I failed on both counts 😭

A quick change in the shelter of the finish tent and I hobbled off in the direction of Paddington underground station, considerably less perky than I had been in the morning!  A solid thumbs up for a very well-organised event which I would thoroughly recommend to experienced ultra runners and first-timers.